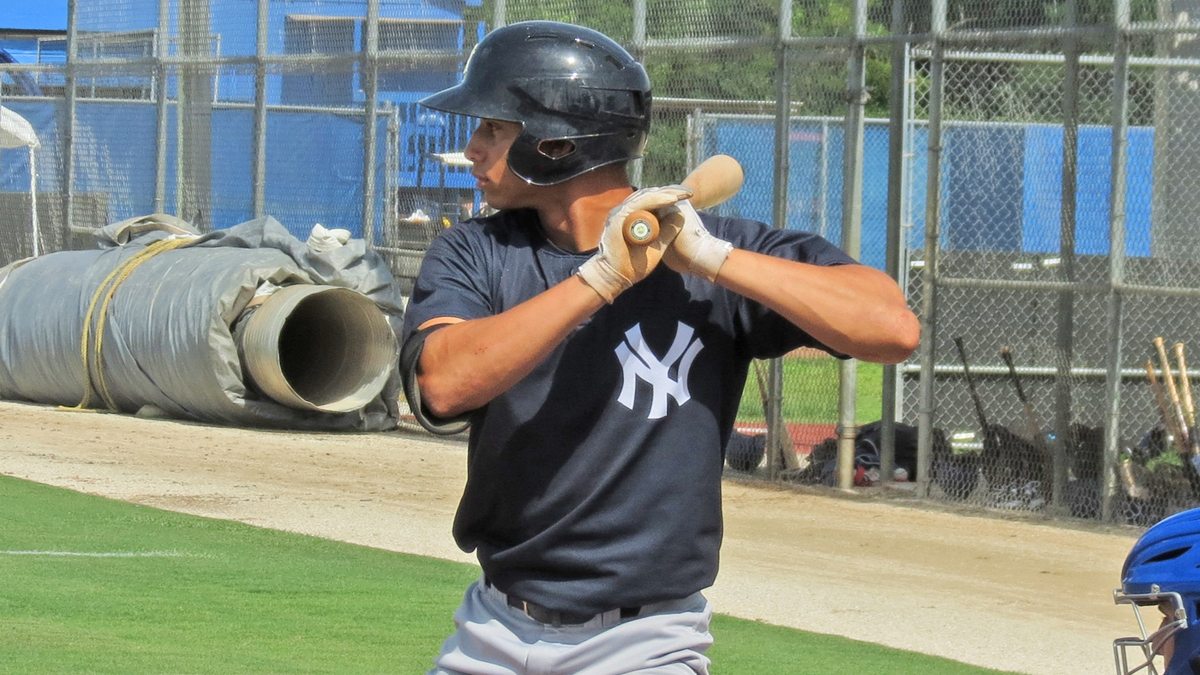 Everything is relative. The possibility of a single person in a given family participating in professional baseball is remote at best. Rejection, obstacles, and performance predicate the unlikely fate. The sport itself is fueled on family connections and the dream of following in a relative’s footsteps resonates despite insurmountable odds. Dreams fuel desire for fulfillment as reality stands to draw apparent reward. For Dominic Jose, the son of a former major leaguer, life around baseball became an inspiration for a prospective career. A boyhood opportunity would be realized after being selected by the New York Yankees in the 24th round of the 2014 First Year Player Draft.

From his early years growing up in St. Louis, Jose, would spend the vast majority of his time surrounded by the limelight of Major League Baseball. He was the son of Felix Jose, a National League All-Star in 1991, who spent parts of eleven seasons with five different clubs. His twenty-nine at bats with the Yankees in 2000 would slip the minds of even the most astute Yankees fan. Jose would retire following the 2003 after spending stints in both Mexico and Korea, yearning for one last opportunity at the game’s highest level. As a teenager, Dominic Jose began to create a legacy for himself, striving to accept the torch passed down by his father.

Jose would attend Boca Raton for High School and earn all-conference honors on three occasions, including a senior season in which he batted to a .370/.500/.519 slash line. His success in high school prompted the Los Angeles Angels of Anaheim to draft him with their 15th round selection in 2011, but the parties failed to reach a deal and Jose elected to attend Stanford University, spending three seasons studying the intricacies of the game and facing its arduous nature for the first time.

Consecutive collegiate seasons batting near the Mendoza Line would cause his draft stock to plummet. The Yankees, undaunted by Jose’s struggles would select the Stanford product in the 24th round three years after being taken by the Angels. Assigned to the Gulf Coast Yankees, Jose would put together a banner season as one of the most experienced players in rookie ball, eclipsing the .300 mark with a .364 on base percentage and his first professional home run. Jose recently spoke to Pinstriped Prospects about his journey through baseball in preparation for his second pro season.

What was it like to grow up around the game of baseball given your dad played in the big leagues? “Ever since I was born I’ve been around the game of baseball. My father, Felix Jose, enjoyed an amazing 11-year career in Major League Baseball. He played for the Oakland A’s, St. Louis Cardinals, Kansas City Royals, New York Yankees, and Arizona Diamondbacks. I was born in St. Louis when my father was with the Kansas City Royals. I grew up running around big league clubhouses and watching guys like George Brett up close. My father is from the Dominican Republic, so every winter I would go to the Dominican Winter Ball games and meet some of my favorite players like Pedro Martinez, Julio Franco, and Sammy Sosa. I’m blessed to have grown up around baseball and I’m thankful that my father has afforded me with so many incredible memories and opportunities!”

‪You were drafted in the 15th round in the 2011 draft by the Angels and by the New York Yankees after attending Stanford in the 24th round. Did you have any regrets not signing give the drop in your draft stock? “When I was drafted by the Los Angeles Angels in 2011, I was faced with a tough decision. I could sign with the Angels and begin my professional baseball career. Or I could pursue a Stanford degree and play with the Stanford baseball team. Ultimately I chose to attend Stanford University. After going to college, I realized I made the right decision. Not only did I receive an outstanding education from a prestigious university, but also I had some of the best experiences of my life. I made friends with people from all over the world. I attended lectures with guest speakers like Mark Zuckerberg and Billy Beane. I played baseball in the Cape Cod League and represented Stanford University in two NCAA Super Regionals. And best of all, I got drafted by The New York Yankees and I’m on the journey to fulfilling my dream of playing Major League Baseball! My family has always supported me in everything I’ve done. My mother has never been prouder of me than the day I graduated from college and received my Stanford degree. At some point, playing baseball will end for everybody and when it does I will always have a world-class education that I can perhaps use one day to continue my love for baseball in a front-office position.”

‪You spent three years in Stanford and played with future number 1 overall draft pick Mark Appel. How did your experience prepare you for professional baseball and did Appel give you any advice upon being drafted? “I played with Mark at Stanford for two years. He’s a great player, but he’s an even better person. At Stanford, Mark organized bible study sessions that improved the emotional well-being of our team. From the first day I stepped on campus, Mark took me under his wing and gave me some advice both on and off the field. He’s a great guy and I wish him all the best!

As I stated earlier, the Yankees drafted you with their selection in the 24th round. What does a player do to prepare for draft day and did you have any idea which team would draft you? “I spoke to many teams, including the Yankees, before the draft. The NCAA Playoffs were happening around the same time as the draft and we were traveling to Indiana and Vanderbilt for playoff games around that time. I couldn’t place all my attention on the draft due to preparation for the playoff games, but I remember the moment when I was drafted by The New York Yankees. I was playing left field at Vanderbilt in the NCAA Super Regional, one step away from the College World Series in Omaha. At some point in the game, my teammates started yelling at me from the sideline “Dom, Dom! Yankees!!!” When I realized they were saying I had just been drafted by the Yankees, I was ecstatic! I was so excited and grateful that I actually lost track of what was going on in the game for a little bit! This game decided if we would go to the College World Series or not so I had to re-focus and try my best to relax! Afterwards, I spoke with Yankee personnel and thanked them for giving me the opportunity to play professional baseball for such a historic franchise and one that my father had played for as well.”

With the Gulf Coast Yankees you had a blistering start to your career batting to a .300/.364/.462 slash line. What adjustments did the Yankees help you make to grow accustomed to the professional level? “The Yankees are devoted to helping me become the best baseball player I can be! The instruction I receive daily from former professional players is invaluable. I enjoy reviewing video footage of my at-bats with the hitting coordinators and adding their notes to my repertoire. The schedule of playing professional baseball can be very physically demanding as well. Working with the strength and conditioning trainers and configuring a productive workout regiment has also been very beneficial.”

For somebody who has never seen you play before, how would you describe yourself as a player? “I’m a student of the game. I’ve been around baseball for as long as I can remember and I’ve always tried to learn the game within the game. Playing baseball for a living is a blessing and I’m having the time of my life!”

What expectations do you have for the upcoming season and is there anything specific things you intend to work on during Spring Training? “I’m very excited for the upcoming season! I reported to Spring Training early to get a head start on preparing for the season. I’m always looking to improve my game and I’m working with the Yankee personnel to improve my power and speed. The New York Yankees are a fantastic organization built on the principles of class and professionalism and I’m grateful to be apart of it. Here’s to a great 2015!”

Adjustments and adaptation are the benchmarks for eventual success in baseball. The efforts to improve and conquer weaknesses ultimately determine progression through the ranks of a big league farm system. Non-descript prospects eventually make the climb, working diligently towards a spot on the 40 man roster and perhaps an opportunity to showcase their ability for the parent club which drafted them many years prior. Players from a baseball family have the advantage of rapidly acclimating to surroundings and developing the discipline necessary to thrive in the coming years. Given his strong rookie season, Jose figures to begin the 2015 season at either Pulaski and Staten Island, building off his sound foundation and seeking to gain momentum.